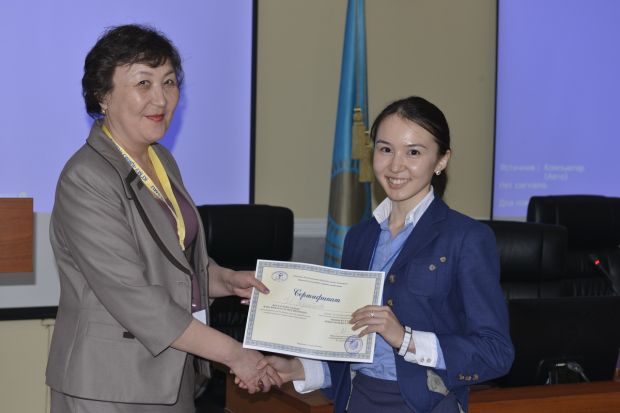 This scientific forum of medical youth is jubilee. 50 years ago in 1964, KSMI held the Ist republican students' scientific conference, which were including reports in foreign languages. The medicine has changed for this half of century, the approaches to training the future doctors become different. This is all reflected in the symbolic title of the conference: «Youth and Science: new perspectives and solutions». The politics of our President, aimed at joining of our Republic in the number of most developed countries of the world, determines the key trends in the forming of modern human medical potential. And in that sense the synergy of education, science and practice is the foundation of modern health care practitioner. The modern medicine is dictating its terms. Her face is the doctors, scientists who have experience in both clinical practice and research. Today's graduates must possess an arsenal of the latest scientific advances and apply them in practice. Therefore, Karaganda state medical university today focused on the synthesis of science, education and practice. The conference demonstrated that KSMU is conducting the systematic work to attract students to scientific research and it was was discussed in plenary meeting. The curator of the Council of SMU and SSS, doctor of medical sciences Saule Mautovna Kabiyeva in her report «The students' science in KSMU: what path of development has to be chosen?» clearly introduced an innovative approach to teaching students based on the reseach-based learning. This approach forms among the students not only knowledge and skills, but also skills for scientific work. Saule Mautovna emphasized the need to integrate scientific component in the curriculum. The method of active learning through the connection of education and science is a modern approach to the formation of a medical professional. The head of the Department of immunology and allergology doctor of medical sciences Meruert Arystanovna Gazaliyeva continued discussion on this subject, showing in the results of the survey as such system is implemented in KSMU. In the work of three sections attended took part not only students of KSMU, but also the guests from Almaty and Aktobe. In total this year the students published 175 abstracts, 54 applications for the report had been submitted.

The section №1 was devoted to the aspects of modern clinical medicine. The diplomas of the highest dignity were awarded to the researches of N. Belyakova, D. Barzhanova, Sh. Muratova, R. Mirzoyev. Their researches raised the urgent questions of emergency treatment of patients with acute coronary syndrome, the effectiveness of use of Silarsil, the assessment of chronic articular pain on digital scale and scale of Wong-Baker, the treatment of diabetes mellitus of the II type. The section №2 was devoted to topical issues of maternal and child health, which are paid a special attention by the government programs today. The diplomas of the highest dignity were awarded to the researches of A. Aidarova, B. Makhamedov, D. Abdrakhmanova, A. Zhumabaeva. The report of A. Aidarova was devoted such pressing problem as the consequences of lack of attention to children. A. Zhumabaeva turned to the urgent question of giardiasis. The study of estimates of predictors and indices of health status in children with giardiasis was conclusive and convincing. The report dealt of B. Makhmedov described the age peculiarities of visual organs. The research of D. Abdrakhmanova concerned such acute problem as the characteristics and the effectiveness of treatment of tuberculosis with multidrug resistance in children and adolescents. The modern medicine is aimed primarily at prevention. It is known the motto: «It is easier to prevent the disease than to treat». The students shared the experience of the research in the field of preventive medicine the third section. The best reports were given by J. Sultanov, A. Kairgali, D.Kaluova, N. Әzіm.

The sections meeting became a talk about actual problems of medicine. These were the discussions with suggestions and recommendations. The conference finished by the confirmation of the resolution and the winners awarding. This conference demonstrated the deep scientific potential of students of KSMU, who are skillfully directed to the work by their supervisors, continuing the glorious tradition of scientific activity of the university.